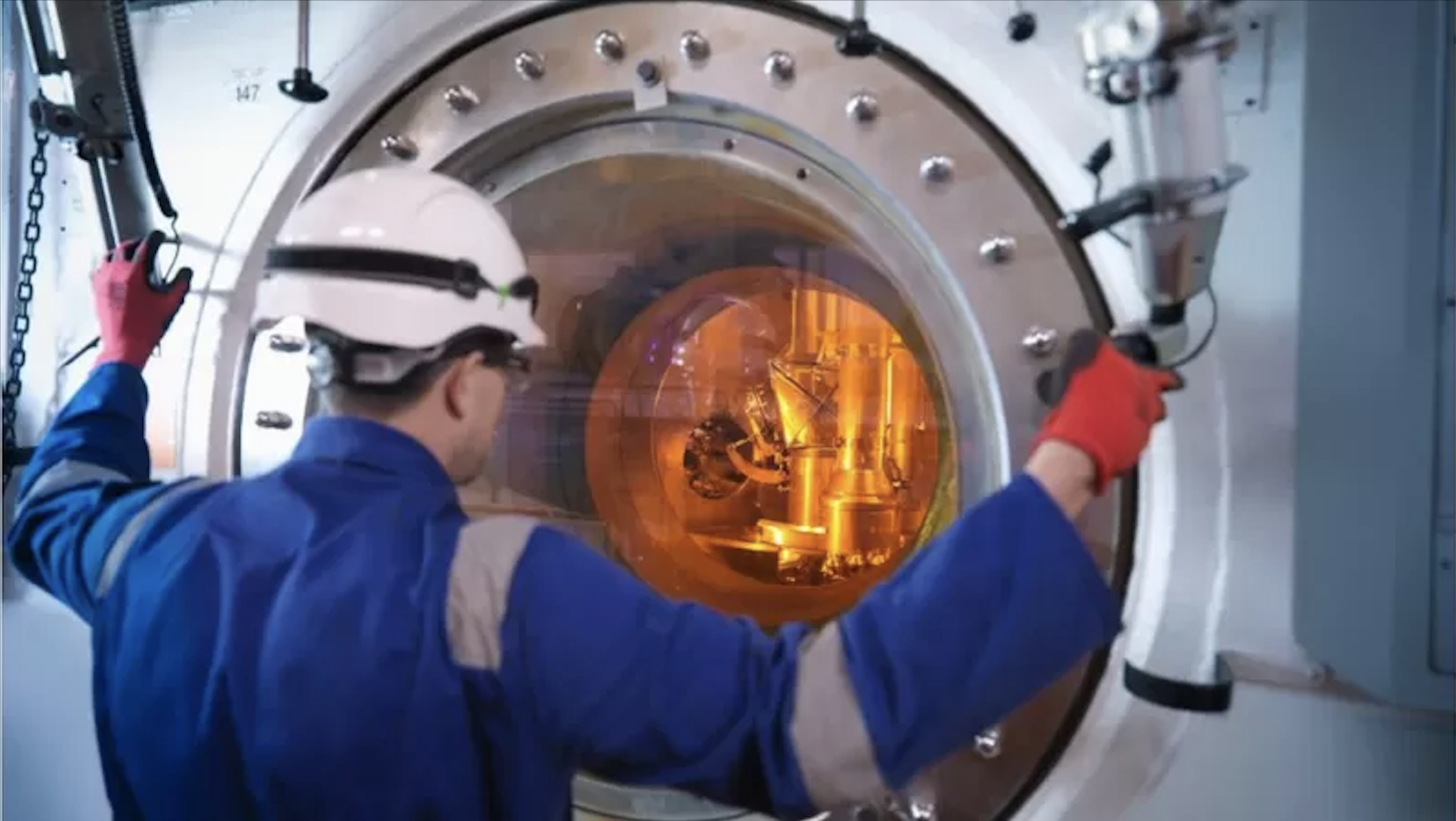 “Nobody in Europe really wants to look in that direction,” says environmental activist Vladimir Slivyak, believing Europe is silent about its reliance on nuclear fuel from Russia.

Environmental activist Vladimir Slivyak had to leave Russia after his Ecodefense organization was declared a foreign agency in 2014, but this only prompted campaigning to embargo the country’s nuclear fuel source. Russia is more intense.

“Nobody in Europe really wants to look in that direction,” said Slivyak, who ran the campaign from Germany against Russia’s state nuclear agency, Rosatom.

Slivyak found strikingly that dependence on Russian fossil fuels is a major concern of Western politicians and media, while similarly reliance on nuclear fuel and technology is not. fully reported.

Why is Russia’s nuclear fuel not subject to sanctions like oil and coal, he asked?

One of the latest demonstrations that Slivyak has participated in was in the city of Lingen, in front of a nuclear component factory where a shipment of Russian uranium will be delivered.

The protesters demanded that the German government terminate the nuclear agreements with Russia immediately. But their call was not heard.

“This import is possible because – as with gas from Russia – the import of nuclear fuel from Russia is not subject to EU sanctions,” said a spokesman from the Department of the Environment, Nature Conservancy. German Federal Nuclear Safety and Nature told the BBC.

The EU has committed to not being reliant on fossil fuels from Russia by 2030, starting with gas, but so far, energy-related sanctions against Russia have focused only on coal and oil. mines, excluding gas and nuclear fuel.

Slivyak is not the only one who wants to change this.

About 1,800 kilometers from Kiev, Natalia Lytvyn, coordinator of the Energy Transition Coalition, a group of environmental groups, filed a petition with the top US and EU official, the Energy Agency. International Atomic Energy Agency (IAEA) and private companies that cooperate with Rosatom.

“We understand that leaders are working to end the import of fossil fuels from Russia, but we cannot say the same when it comes to nuclear,” Lytvyn said.

How dependent is Europe on nuclear fuel from Russia?

Western nations have been trying to cut their dependence on Russian oil and gas since Moscow invaded Ukraine in February 2022.

The EU says it will cut two-thirds of its gas imports from Russia within a year, but not an outright ban.

Russia is currently a country with an important position in the global gas market; By 2021, the country will supply Europe with about 45% of its gas. The role of uranium production is much smaller – producing only 8% of uranium in 2019.

But mining uranium ore is only the first step in producing nuclear fuel.

“Russia has a huge presence in the global market in terms of the next two steps of the nuclear fuel process,” said Dr. Matt Bowen, a research scholar from Columbia University in the US.

To make nuclear fuel, raw uranium must be extracted from ore and ground into uranium-oxide. The uranium is then converted to uranium-hexafluoride (suitable for enrichment) and finally fuel rods are made.

“Russia accounts for almost 40% of conversion services globally in 2020 and 46% get rich services world by 2018,” said Dr. Bowen, citing commentary he co-authored for Columbia University’s Center on Global Energy Policy.

But Russia is not just exporting nuclear fuel.

Rosatom is the largest nuclear reactor factory in the world. By 2021, Russia’s national energy agency has planned to build more than a dozen nuclear reactors from Bangladesh to Turkey.

“The West should take steps to reduce Russian involvement, but in the context of such a large presence it takes investment and time,” said Dr. Bowen.

Cutting down on Russia’s presence in the Western nuclear fuel market will be challenging because many of the reactors operating or being rebuilt use Russian technology.

VVER is the abbreviation for water-water power reactor, originally designed by the Soviet Union. Today, most of these reactors operate on fuel from Russia.

The Russian-controlled Zaporizhzhia nuclear plant in Ukraine, close to the front lines, is home to six of the country’s many VVER reactors.

Ukraine gets about 50% of its energy from nuclear sources, so do Slovakia and Hungary.

The Energy Transition Coalition has tried to warn European authorities that many countries have no choice but to continue buying fuel from Russia.

“Countries like Bulgaria and Hungary can’t switch to other forms of fuel because of the complexity,” says Lytvyn.

“If you have a gas or coal power plant, you just put coal or gas in. But with nuclear, you can’t put uranium in a reactor, you need the technology to build the rods. nuclear fuel for your reactor form,” explains Slivyak.

Even if Russian nuclear power could be replaced, countries with VVER reactors would still rely on Russia for components and services, Dr. Bowen said.

He also said reducing dependence on Russia is not impossible, but it’s hard to know how much time it will take.

Two months after Russia invaded Ukraine, Finland announced it would withdraw from its contract with Rosatom to build a third nuclear plant in the country. Finland cited risks related to the Ukraine war.

But the war hasn’t stopped Hungary, another EU member, from continuing an agreement with Russia signed in 2014. The Hungarian Foreign Ministry announced in August that Rosatom would still carry out the project worth $12.4 billion – largely funded by Russia – to build two new nuclear reactors.

Slivyak described Rosatom as “one of the most important weapons in Putin’s regime to spread geopolitical influence around the world” and said his organization will not stop fighting.

“If we don’t talk about this, if we don’t really push the politicians, they won’t do anything,” Slivyak said.

After Slivyak’s Ecodefence organization protested in Lingen, the German Federal Ministry for the Environment, Nature Conservation and Nuclear Safety told the BBC it was “taking very seriously such deliveries of uranium because of the Russian war”. aimed at Ukraine’.

“Russia doesn’t just have a monopoly on uranium supplies – buying will still be possible from other countries,” the spokesman told the BBC.

But Germany’s Federal Ministry for the Environment, Nature Conservation and Nuclear Safety says it can do little, as “the decision to buy uranium from Russia depends exclusively on the uranium plant in Lingen” and has no mechanism. legislation to prevent them from choosing fuel from Russia.

Regarding sanctions, for EU countries, the European Commission is the authority to impose them.

After Putin ordered partial mobilization, the EU issued an eighth round of sanctions.

The proposal will be forwarded to the 27 member states, which decide to enforce the new sanctions.

“We never comment on the process of imposing new sanctions because this is a matter of confidentiality and is entirely in the hands of member states, which must agree unanimously with the Council. but nothing is not considered,” a European Commission spokesman told the BBC before the proposal was made.

Dr Bowen said European nations with Russian-style reactors would “have to make complex decisions” whether to stop importing nuclear fuel from Russia, an area that could very well become important. more important at the onset of winter and a possible energy crisis.

Germany, for example, has decided to reverse its decision to completely withdraw from nuclear power (made after the Fukushima disaster in Japan in 2011) and will keep its three remaining nuclear power reactors operational.

It seems clear that European nations face some tough choices, but Lytvyn said the West must act quickly and with sanctions against Russia’s nuclear fuel.

“They started a big war in Europe, a war we haven’t seen since World War II. There is no place for selective sanctions,” Ms. Lytvyn said.